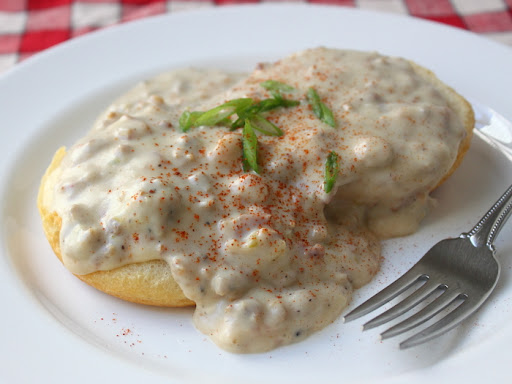 This sausage country gravy recipe comes from a time before cooks tried to think of ways to trim a few calories, but rather, thought of ways to sneak more calories into a dish. This was a meal that was meant to fill you up and keep you satisfied for a long time.

In addition to the astronomically high calorie count, another advantage of a milk gravy that’s been thickened with a roux made from the rendered fat of meat scraps, is it’s very cheap. So, when you combine “cheap,” with “filling,” and “delicious,” you have all the makings of a diner classic, which this certainly is.

In a diner, this gravy (also known as sausage gravy or cream gravy) would be made with leftover cooked sausage links and other breakfast meat scrapes like crumbled bacon, or ham ends. Since we’re making ours from scratch, we have the advantage of all that freshly rendered fat to make the light roux. 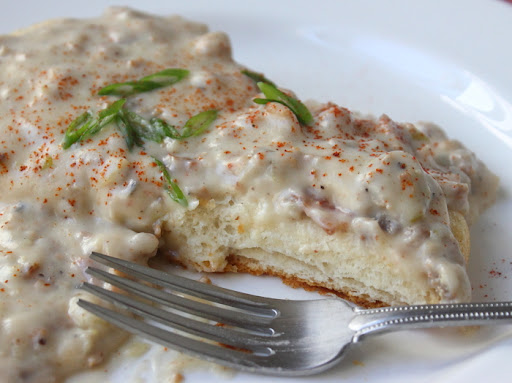 This method is more authentic and flavorful, but admittedly does nothing to improve the recipe’s dingy color and questionable appearance. Let’s face it, some great recipes are just plain ugly and that’s the way it is. I used a low fat milk, which makes for the dingiest color, but whole milk or cream, if you want this extra rich, do look marginally better.

As I mention in the video, if you’ve eaten this before, and know how shockingly good it can be, the look of the dish never crosses your mind. If this were a blind date, the recipe would be described as being “really fun with an amazing personality.”

As far as serving suggestions go, you can’t miss with fresh baked buttermilk biscuits (even though I used store bought, we have a great recipe, which you can see here), but this is also out-of-this-world on things like country-fried steak, and fried chicken. I really hope you give this a try soon. Enjoy!